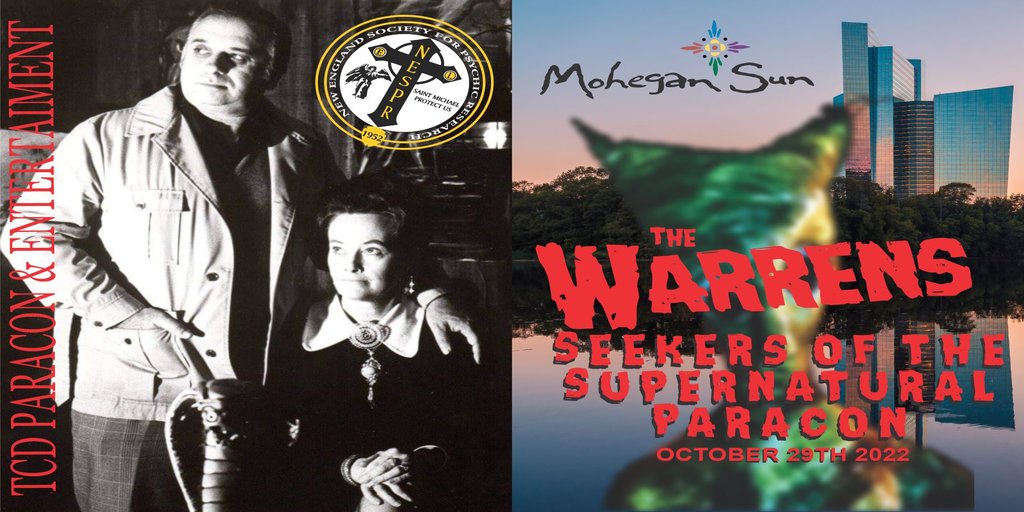 The Warren's Seekers of the Supernatural Paracon 2022

The Warren's Seekers of the Supernatural Paracon will be coming to the Mohegan Sun Convention Center in Uncasville, CT on October 29, 2022! After a successful sellout debut in 2021 the event had to move to a larger venue. Where better to get together with your para-friends than New England's top attraction, Mohegan Sun Resort and Casino!

A paracon with Ed & Lorraine Warren's namesake would not be complete without the world famous Warren's Occult Museum. Once again we are bringing the museum to the public where you can view, in person, the Shadow Doll, Satanic Idol, the Haunted Dinosaur Toy, and of course the real Annabelle! This is the only place in the world you will be able to view the real Annabelle doll that inspired the Annabelle movies. An actual Annabelle doll from the 2019 film, Annabelle Comes Home will also be on display. *A separate ticket will need to be purchased to view the museum pieces.* / **Museum ticket allows one(1) visit to the museum attraction. No readmission will be permitted.**

TCD Para-Con & Entertainment LLC is bringing new and exciting guest speakers from all aspects of the paranormal and supernatural. Vendors from far and wide will satisfy your curiosity in demonology, ghosts, UFO's, monsters, urban legends, cryptozoology and so much more! Psychic readers of all types will be on hand to assist in guiding you in your spiritual journey. Whether the experienced paranormal investigator or novice ghost hunter at the local cemetery there is something for everyone! From best selling authors to healers, from crystals to Ouija boards, it will all be here!

**GUEST SPEAKERS & LECTURES** - Please note that seating is limited and not guaranteed. Entry to lectures will be first come/first serve. After each lecture all viewers will have to leave the room and get back in line if they would like to regain entry.

Tessa DelZoppo Groff is on her medium gallery tour, "LIVE! with The Other Side"! She is also working with Nick on Death Walker and their hit web-series, "Deadtime with the Groffs."

The Amazing Kreskin is a mentalist who's career spans 7 decades, has traveled over 3 million miles, performed 25,000 shows and has read a million minds! He was a regular on Johnny Carson and David Letterman. We are honored to have The Amazing Kreskin perform at our paracon!

Keith & Carl Johnson are demonologist brothers well known for their work on TV shows such as Ghost Hunters, Paranormal State, and Ghost Adventures just to name a few. Keith & Carl were instrumental in having Ed & Lorraine get involved in The Conjuring House investigation that ultimately lead to the creation of The Conjuring Universe of movies!

Jereme Leonard is known as the "Cajun Demonologist" amongst his peers and is best known for his role on Travel Channel’s Ghosts Of Morgan City. He has been featured on A Haunting, American Supernatural, Hunting Monsters with Chris Jericho, and When Ghosts Attack. Jereme is also a participant on the brand new NETFLIX original paranormal series 28 DAYS HAUNTED being released on October 21, 2022!

Mike Ricksecker is an accomplished author and filmmaker and has been featured on TV shows The Alaskan Triangle, The Haunted, and My Ghost Story.

Arne Johnson was portrayed in The Conjuring 3: The Devil Made Me Do It. After challenging a demon, Arne was attacked and possessed by the evil entity that ultimately lead to a death and Arne serving several years in jail.

YouTube's OVERNIGHT Elton Castee & Corey Scherer have taken over YouTube with their OVERNIGHT channel dedicated to investigating the paranormal. They will be talking about their experience during the ONLY overnight (pun intended) investigation of The Warren Occult Museum besides NESPR that was featured in a special 4 part special!

Other Special Guests include:

Sean Austin is a demonologist best known for his work on the Travel Channel's Ghost Loop. He is also a participant on the brand new NETFLIX original paranormal series 28 DAYS HAUNTED being released on October 21, 2022!

Rob Thompson is a British Spirit Medium known for his work on The Ghost Finders on Amazon Prime, Travel Channel's Paranormal 911 and the new season of A Haunting

Jimmy Petonito is a paranormal legend who has assisted in over 50 exorcisms. He worked closely with Father Malachi Martin and was featured on the Netflix documentary, Hostage to the Devil. Jimmy also authored Phantom Messages and hosted the long time streaming show, The Haunted Chronicles, with co-host actress Jennifer Runyan.

Joe Chin has traveled the world investigating the paranormal. His Skeptical curious side has enhanced his ability to investigate during his impressive career. Joe is well known from the ground breaking show, GHOST HUNTERS and GHOST HUNTERS INTERNATIONAL. Teaming with his sister, Christine Downes, they introduced, Metaphysical Reading with Joe & Chris. Christine will also be accompanying Joe at #warrensparacon!

Ronny LeBlanc stars in the monster and record breaking hit EXPEDITION BIGFOOT on Travel Channel which is heading into it's 4th season! Ronny has been featured on Conjuring Kesha, In the Search of Monsters, Finding Bigfoot and is one of the video experts featured on Paranormal Caught on Camera.

Rub elbows with some of the world's top paranormal researchers and investigators including co-directors of The New England Society of Psychic Research, Tony and Judy Spera. Judy is the daughter of Ed & Lorraine Warren and was portrayed in the last Annabelle movie, “Annabelle Comes Home”. Tony was the host of The Seeker's of the Supernatural with Ed & Lorraine and is the curator of The Warren's Occult Museum. The NESPR team will be on hand including Sr. Lead Investigator, Dan Rivera, and Lead Investigator/Researcher, Chris Gilloren. Veteran members who learned from and worked side by side with the Warrens - Rick Clark and Jimmy "Mr. Haunted" Petonito. Jimmy is well respected and loved in the paranormal/supernatural field and is the host of the popular paranormal radio program, "The Haunted Chronicles". Jimmy has assisted in numerous exorcisms and was featured in "Hostage to the Devil" with Father Malachi Martin!

Dan Rivera and Tony Spera are consulting producers on 28 DAYS HAUNTED. A Netflix original paranormal series being released on October 21, 2022. The show takes three teams of paranormal investigators and places them in some of America's most haunted locations for a paranormal experiment based on the theories of Ed & Lorraine Warren. Tony is also the show's co-host.

**Seating in guest speaker area is limited to approximately 450 seats and is first come first serve. Seating is not guaranteed**

The TCD Paracon & Entertainment Cancellation & Refund Policy will be as follows to assure consistency and is applicable to the VIP Party to be held on October 28, 2022 and The Warren's Seekers of the Supernatural Paracon on October 29, 2022.

The refund and cancellation policy will not be waived.

No tickets are available for this event.

This event is integrated with Event Protect.In the event of a qualifying event cancellation, ticket holders complete a secure online refund form which enables Event Protect to process refunds directly.